While on an absolute contraction basis, the major automakers show reduction in emissions, on an intensity basis the trend is not consistent

The Global automobile industry, one of the sectors in the spotlight with respect to emissions, is still showing a patchy trend in terms of emissions reduction.

On an absolute contraction basis, the numbers do look good for all the manufacturers in the chart below (the charts below are not a comprehensive list of global makers; they also show only Scope 1 and Scope 2). The US firms, GM and Ford, show the sharpest drop, both showing a reduction of over 30% in 2021 over 2019. 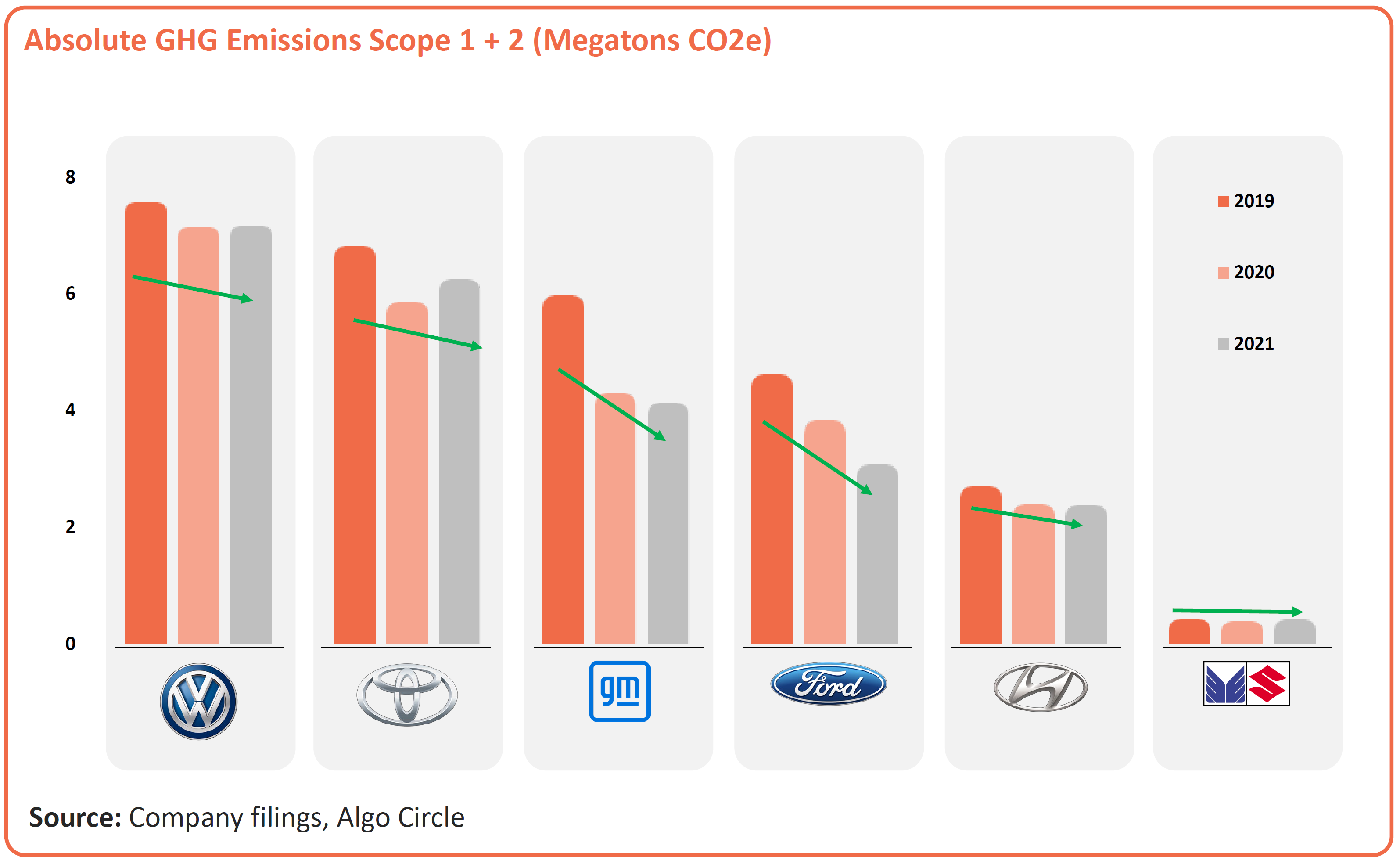 However, when one turns the numbers into an intensity-based emissions comparison (see chart below) – based on vehicles produced – the trend changes. For some of the leading players, the intensity-based emission trend appears upward instead of downwards. This is because production numbers in 2021 remained below 2019 numbers for most automakers. GM and Ford show good progress on this parameter too, their reduction trajectory appears well within the requirement for their Net Zero goals. 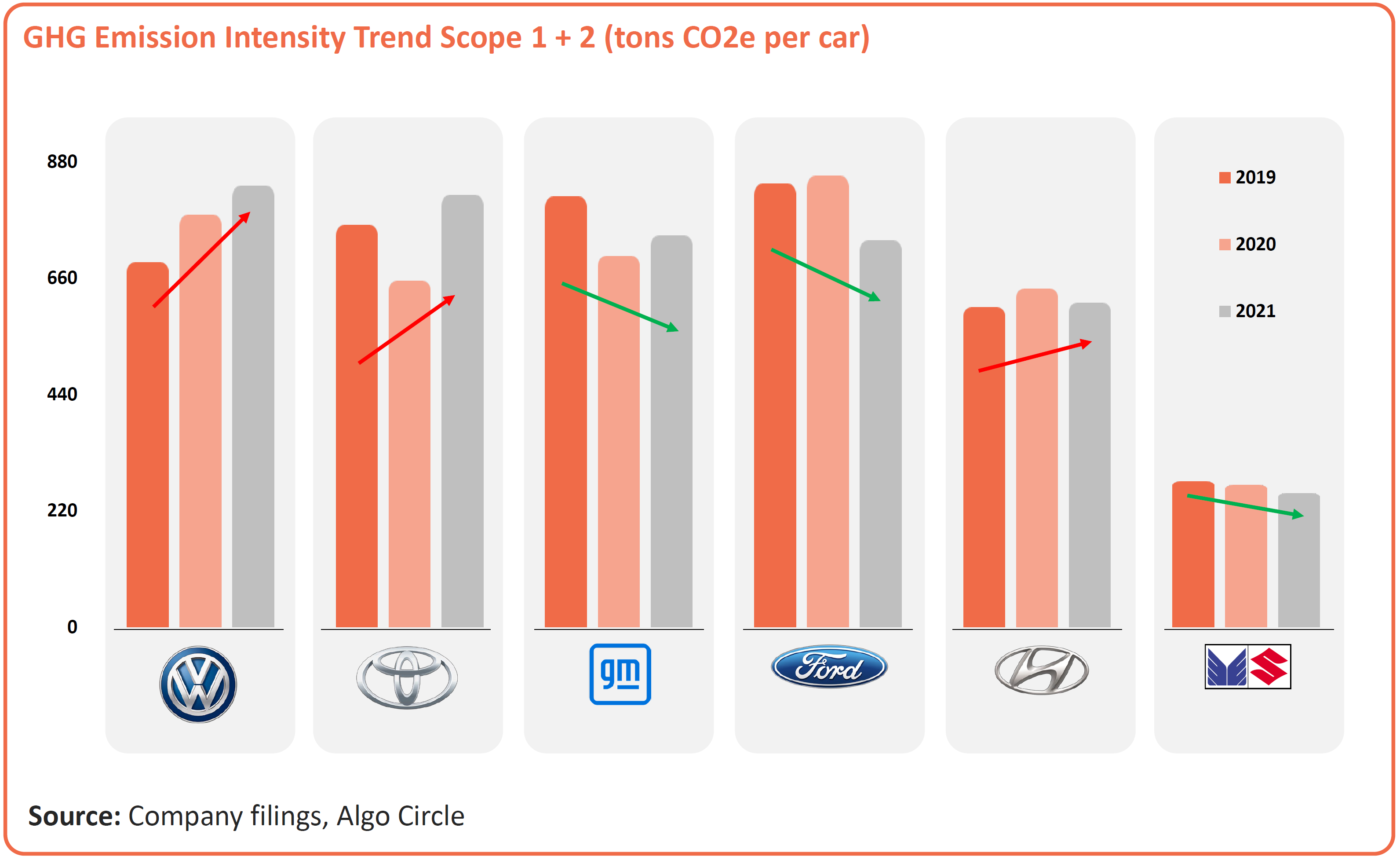 In the chart below, we compare the producers with Tesla on Scope 1+2 emission intensity for 2021.

Tesla shows better performance compared to some of the larger Internal Combustion Engine (ICE) based car makers, but not so compared to two of the Asian manufacturers: Hyundai and Maruti Suzuki. They have the least intensity numbers for Scope 1 and Scope 2. Both could be benefiting from the larger share of small cars in their portfolio.

Tesla’s lower numbers compared to a GM or VW could be a reflection of its comparatively newer plants. Any new plant will generally have better energy efficiency and emission characteristics compared to an older plant. It appears Tesla has revealed emission data for the first time in 2021. Its 2020 sustainability report – Tesla calls it ‘Impact Report’ – has this line: At the moment, the manufacturing process of a Model 3 results in slightly higher GHG emissions than an equivalent combustion engine vehicle.

While the current progress may not be clearly positive, all car makers are making concerted efforts towards Net Zero targets via twin routes: increasing use of renewable energy; and increasing their portfolio of EVs.

Building a renewable portfolio may be the way to go for all automakers. In terms of its overall carbon footprint, Tesla has benefited from its 2016 acquisition of SolarCity (now called Tesla Energy). Till the end of 2021, Tesla Energy had cumulatively generated over 25.37 Terawatt-hours (TWhs), which Tesla claimed is more than the total energy Tesla has used to run all its factories since it began producing Model S in 2012 and electricity used to power all of its vehicles in that same period combined. Tesla claims this number – total energy used at factories and for recharging all its vehicles produced since inception – is 25.27 TWh. It is interesting how close this number is to Tesla Energy’s generation.

Your email address will not be published. Required fields are marked *